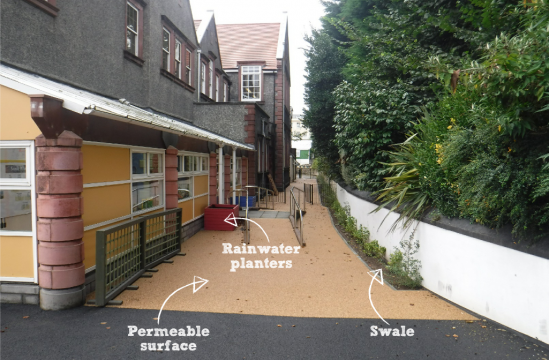 The playground at Vauvert Primary School has been modified to help reduce the amount of water entering drains in town during heavy rainfall.

Guernsey Water, in partnership with Education Services and Vauvert Primary School, has installed a sustainable urban drainage system (SuDS) at the school which has reduced the quantity and speed of surface water flowing into the foul water network.

"Water runoff from heavily tarmacked or paved areas can be the cause of serious problems downstream," said Jon Holt, operations manager for Guernsey Water.

Vauvert Primary School is situated upstream of St Peter Port's sewer network and had a large impermeable area connected to the sewerage system (some 4,000m²) which, during heavy rainfall, contributed a considerable amount of surface water into the sewer network.

The school needed to carry out essential maintenance work to its playground which gave Guernsey Water the opportunity to implement a number of SuDS techniques.

The retrofit has not only lessened the risk of flooding and pollution downstream, it has also increased the biodiversity of the playground by creating more green areas for recreation and outdoor learning.

"These opportunities can also be applied to existing properties. Not only does the Vauvert project showcase SuDS methods, but it also educates the pupils, teachers and parents about techniques that can be installed at home," said Imogen Berryman, network manager for Guernsey Water who was responsible for the project.

"This is not going to be a quick fix and solve all the islands flooding issues, but it's something we hope people will consider at home when resurfacing and extending or when designing commercial or domestic new builds," said Miss Berryman.

Among the SuDS implemented at Vauvert Primary School are:

Recycled plastic planters at the bottom of the downpipes.  These divert rain water from the school roof, which percolates through the soil and stones to ultimately discharge slowly back into a gully.  These planters manage around 550m² of the school's roof surface area.
A permeable resin-bound surface has also been laid on a section of the playground to slow runoff and direct it towards a planted swale.  The swale, which consists of graded stone, grit, and top soil, captures up to 200m² of runoff water.

Educational information boards have been put up around the school to inform pupils and visitors about the work that has been done.

Tim Walters, head teacher at Vauvert Primary School said: "The techniques Guernsey Water has installed has not only rejuvenated a redundant area of the playground but have also added so much value to student learning.  A lot of the plants in the swale and the planters specifically encourage bird life and insects and we regularly hold outdoor lessons on biodiversity and wildlife.

"We are extremely pleased with the work; it has been a very positive project for us all."

View Our 7 Outcomes
Top
Have a question or cannot find what you are looking for? Try our support pages. Go
Happy to help